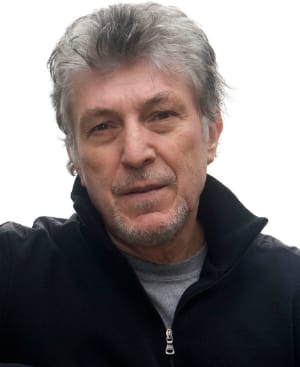 Randall Sullivan was an atheist, he worked as a war correspondent in Bosnia. He was also a contributing editor to Rolling Stone magazine. During the visit Medjugorje, something changed his life forever.

LOS ANGELES, CA (Catholic Online) - Sullivan began his visionary Mirjana polling day. Explained the interview went badly and she threw him out of her house. Inside, nothing more to do for the day, Sullivan decided to climb Cross Mountain. The day was hot and sunny, almost too hot to climb. Few people seemed willing to make a trip to trip, but Sullivan went anyway.

Take prayer trivia quiz now!
As he climbed, he heard a beautiful melodic voices singing in French. He ran to the side of French nuns, singing and praying the Way of the Cross. Sullivan decided to join his side for a while.
Pleasant experience was interrupted developing storm that swept the mountain. Soon it was raining. Thunder and lightning crashed everywhere. Sullivan suddenly felt a compulsion to kneel and pray, which he managed for the first time in my life. 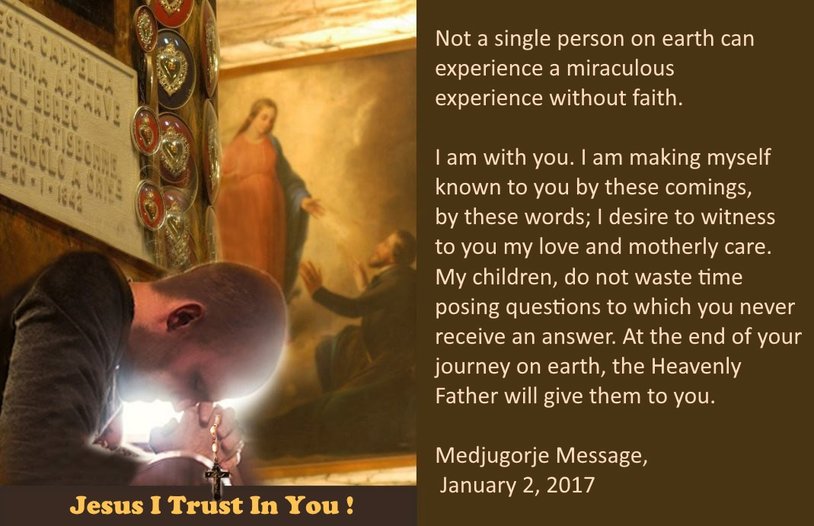 When you pray, pretty, young woman appeared to him.


When you pray, pretty, young woman appeared to him. She delighted in the storm and put the hat on his head. The moment was so peaceful and surreal that Sullivan closed his eyes to make him take it. When he opened his eyes, everything was gone. Brilliant sun burned. Nuns were nowhere to be seen. The young woman disappeared. He had no hat. No one else saw nothing. Not a nun, not a storm, nothing. For all others, it was an ordinary day in each direction.

Sullivan realized that just experienced a miracle. From that moment he became a believer.
Sullivan is now believed miracles in Medjugorje after he witnessed one firsthand. Critics says: "There is only one word that I found it so immediately could produce an enthusiastic smile derisive snort or uncomfortable silence in the Vatican as" Medjugorje "What fascinated me was that those hyped Medjugorje as a place sacred virtues incomparable force all made pilgrimages to experience the community first hand, while those who scoffed knew only what they have read or heard. priests tend to reject the report of the miracle at Medjugorje (first as an insult to their intelligence and the other as an embarrassment to the church), everything seemed strangely subdued. "
What do you think? Do you believe in miracles in Medjugorje?


Those who say, I do not believe in God, how difficult it will be for them when they will approach the Throne of God and hear the Voice, Enter into Hell.

April 4, 1985 (Holy Thursday) "Dear children! I thank you for having started to think more about God's glory in your hearts. Today is the day when I wished to stop giving the messages because some individuals did not accept me. The parish has been moved and I wish to keep on giving you messages as it has never been in history from the beginning of the world. Thank you for having responded to my call."

October 2, 1986 "Dear children! Today again I am calling you to pray. You, dear children, are not able to understand how great the value of prayer is as long as you yourselves do not say: 'now is the time for prayer, now nothing else is important to me, now not one person is important to me but God.

Those who say, I do not believe in God, how difficult it will be for them when they will approach the Throne of God and hear the voice, Enter into Hell.


Today again I am calling you to complete conversion, which is difficult for those who have not chosen God.God can give you everything that you seek from Him.But you seek God only when sicknesses, problems, and difficulties come to you, and you think that God is far from you and is not listening and does not hear your prayers.No, dear children, that is not the truth.When you are far from God, you cannot receive graces because you do not seek them with a firm faith. Day by day, I am praying for you, and I want to draw you ever more near to God, but I cannot if you dont want it.
Therefore, dear children, put your life in Gods hands.


Oct 8, 1985 Mary - Those who say, 'I do not believe in God' how difficult it will be for them when they will appear at the throne of God and hear the voice: Enter into Hell.
Today again I am calling you to complete conversion, which is difficult for those who have not chosen God.God can give you everything that you seek from Him.

Little children, love bears everything bitter and difficult for the sake of Jesus, who is love.
http://medugorje.org/concordance/c217.htm

​“The victory , when it comes, shall be brought by Virgin Mary.”“The Holy Father is in anticipation of this victory of Virgin Mary's.”Our Lady said on April 4, 1985, “I wish to keep on giving you messages as it has never been in history from the beginning of the world. Our Lady said on May 2, 1982, “I have come to call the world to conversion for the last time.Afterwards I will not appear any more on this earth.”

​"My children, understand that the most important thing in our lives is prayer."


There are many Christians who are no longer faithful, because they do not pray anymore. Have them begin again to recite each day, at least, 7 Our Fathers, 7 Hail Mary's, 7 Glory Be's, and the Creed. Above all, abstain from Certain television programs. They represent a great peril for your family. After you have seen them, you can not pray any more. Give up likewise, alcohol, cigarettes, and pleasure of this kind. "

"My children, pray! The world has been drawn into a great whirlpool. It does not know what it is doing. It does not realize in what sense it is sinking. It needs your prayers so that I can pull it out of this danger."

Prayer and Fasting for Life 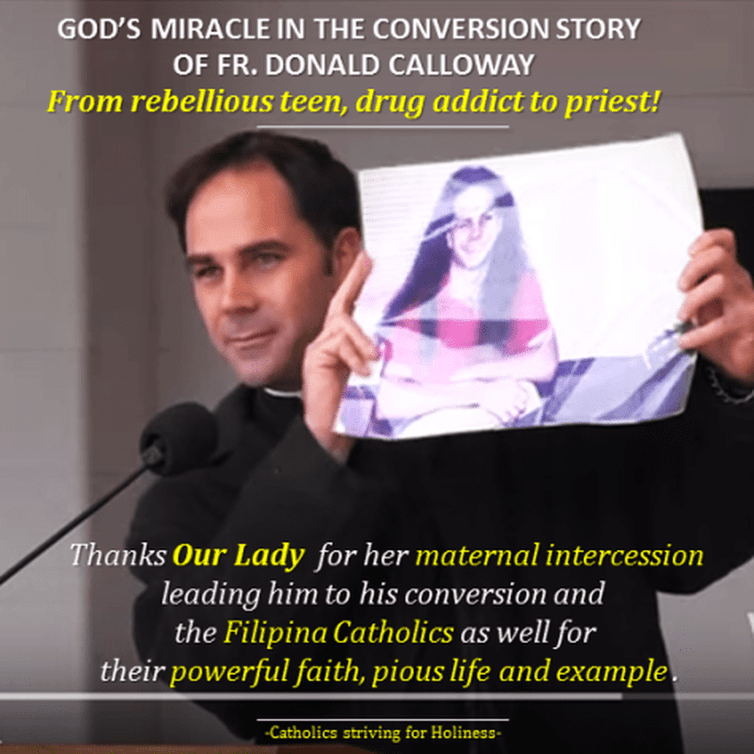 ​
GOD’S MIRACLE IN THE CONVERSION OF
A REBELLIOUS TEEN, DRUG ADDICT TURNED PRIEST.

A True Conversion Story. Dear friends, let us not lose hope, neither with ourselves nor with others. Through the loving intercession of Our Lady, let us ask God’s infinite mercy for the conversion of many people, beginning with ourselves. Let us not forget that CONVERSIONS DO HAPPEN WITH GOD’S GRACE, OUR LADY’S INTERCESSION AND MAN’S CORRESPONDENCE! 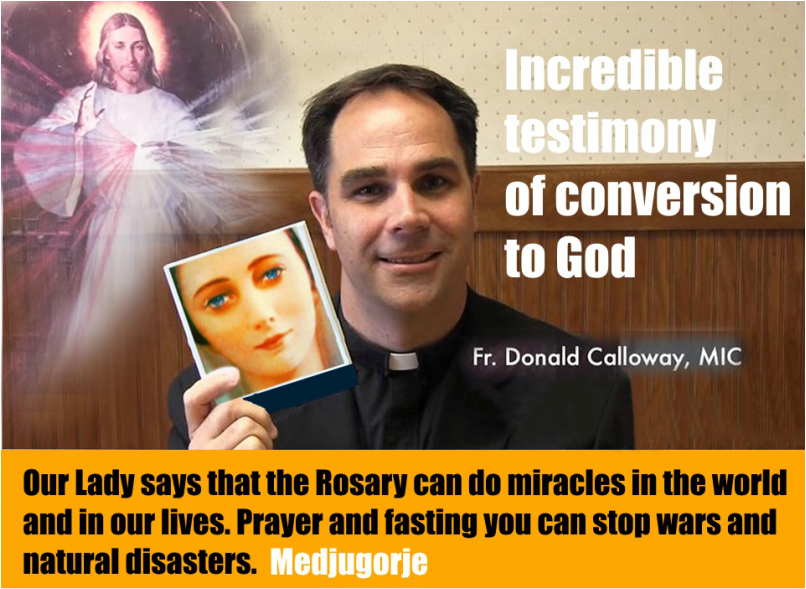 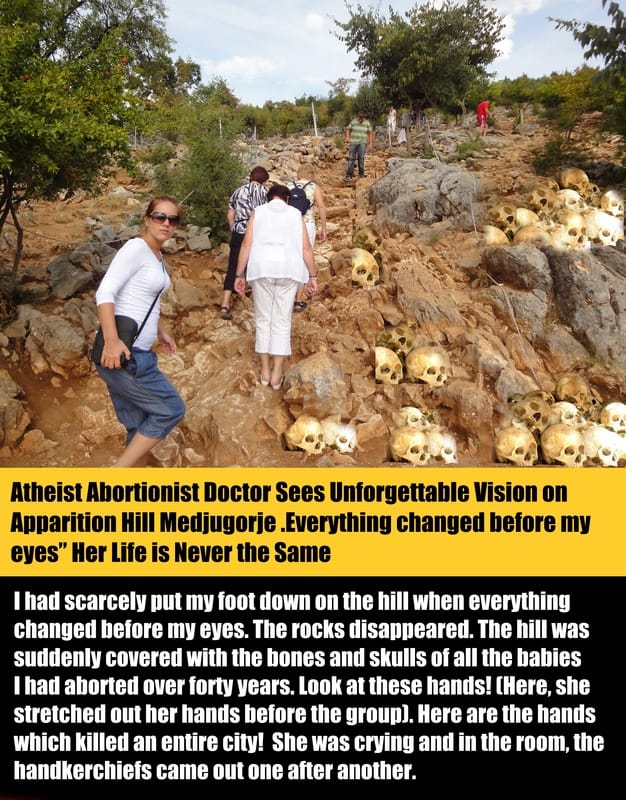 
“I had scarcely put my foot down on the hill when everything changed before my eyes. The rocks disappeared. The hill was suddenly covered with the bones and skulls of all the babies I had aborted over forty years. Look at these hands! (Here, she stretched out her hands before the group). Here are the hands which killed an entire city!” She was crying and in the room, the handkerchiefs came out one after another.”
†
Valentina, 29, comes from the Ukraine. Upon seeing
her, you’d believe her to be a “normal,” young girl. However! Her story is
far from ordinary! From an atheist background and marked by the hardcore
communism of those regions, she grew up in material poverty and spiritual
emptiness.
One day, she won a “green card,” a sort of American-style lottery,
and was given the opportunity to go and live in the United States! She was
only 18 years old, and worked as a hairdresser in the Ukraine. So considering
the horrible conditions of her life, she left. In the beginning, it was very hard –
she didn’t speak a word of English. Her work did not fill up her life, and a terrible
feeling of emptiness overcame her. She asked herself the questions that the
Queen of Peace asked all of us on July 2nd: “Stop for a moment and reflect on
yourselves and on the transience of this your earthly life. Then reflect on eternity
and the eternal beatitude. What do you want? Which way do you want to set out on?” 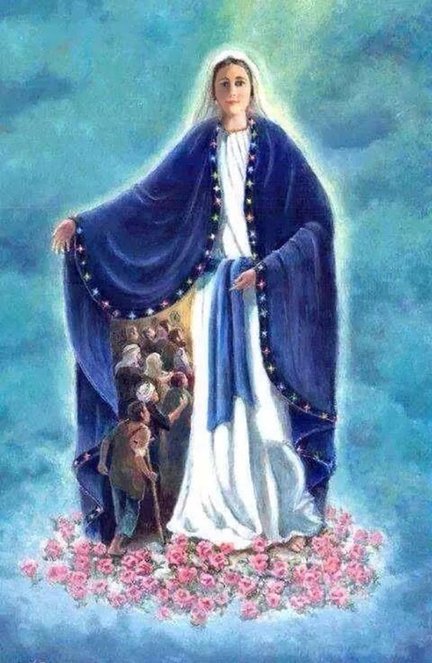 Our Lady said:  that there is not one man in the world that doesn't need Holy Confession at least once a month !

Our Lady said:  that there is not one man in the world that doesn't need Holy Confession at least once a month.

Go for a Confession because only a pure heart can be in grace, can know how to receive and accept grace. Don't think of it as an obligation.

Dear children! In the great love of God, I come to you today to lead you on the way of humility and meekness. The first station on that way, my children, is confession. Reject your arrogance and kneel down before my Son. Comprehend, my children, that you have nothing and you can do nothing. The only thing that you have and that you possess is sin. 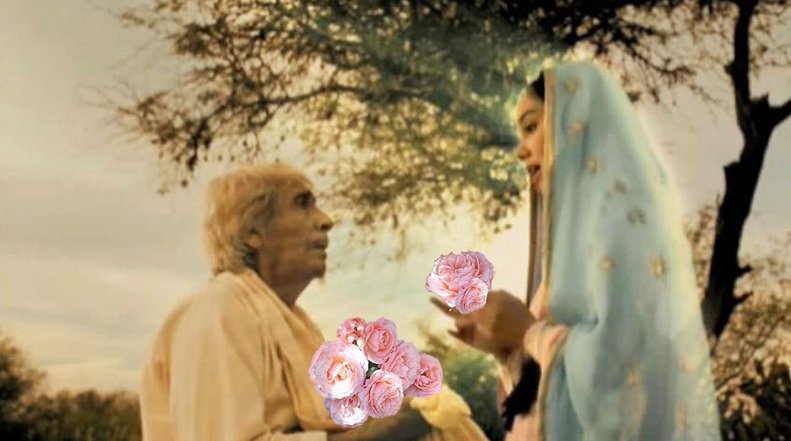 
​Mother, why are you so beautiful ? I am beautiful because I love

"Dear children! Once again I desire to call you to prayer. When you pray you are much more beautiful, like flowers, which after the snow, show all their beauty and all their colors become indescribable.
​
So also you, dear children, after prayer show before God all so much more what is beautiful and are beloved by Him.

Therefore, dear children, pray and open your inner self to the Lord so that He makes of you a harmonious and beautiful flower for Paradise. Thank you for having responded to my call."(December 18, 1986) 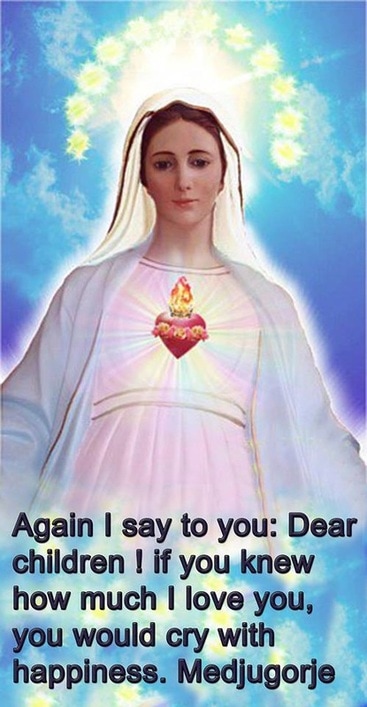 Vicka speaks about her trip with the Gospa (Madonna, the Virgin Mary) in the afterlife. Vision of Heaven, Purgatory and Hell

Jakov and Vicka are the only two human beings in the history of the world who were physically in body, taken by the hand by the Holy Virgin Mary, to Heaven, Purgatory and hell. Our Lady wanted to dispel atheistic thoughts that these places are not real – they exist, they exist, they exist.


(Story drawn by the interview of Father Livio, director of Radio Maria) Father Livio: Tell me where you were and what was the time.

Vicka: We were in the small house of Jakov, when the Gospa has came. It was in the afternoon, at the 3,20 PM.

❤ 💙💖💞💛
Medjugorje - From hell to heaven passing through bunga bunga. Ania Goledzinowska: By faith I have found happiness. 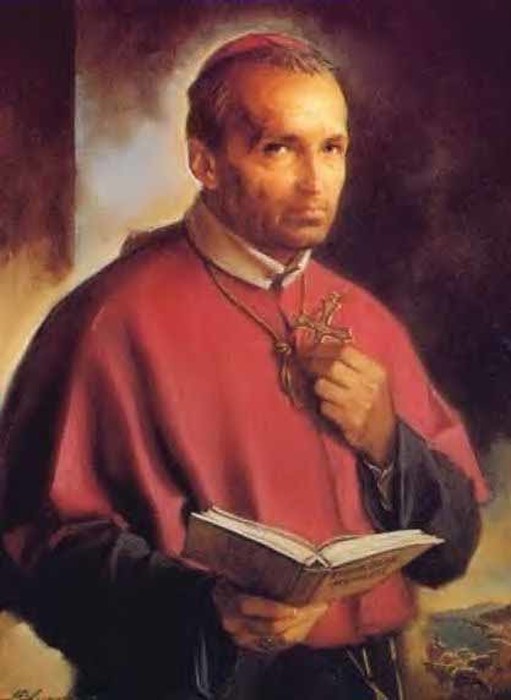 There is nothing shorter than time, but there is nothing more valuable. There is nothing shorter than time; because the past is no more, the future is uncertain, and the present is but a moment. This is what Jesus Christ meant when he said: "A little while, and now you thall not see me." We may say the same of our life, which, according to St. James is but a vapour, which is soon scattered for ever. "For what is your life? It is a vapour which appeareth for a little while." (James iv. 14.) But the time of this life is as precious as it is short; for, in every moment, if we spend it well, we can acquire treasures of merits for heaven; but, if we employ time badly, we may in each moment commit sin, and merit hell. I mean this day to show you how precious is every moment of the time which God gives us, not to lose it, and much less to commit sin, but to perform good works and to save our souls.

Miracles of the Mother of God. Read more: http://ocistec-purgatory.weebly.com/the-miracles-of-our-lady.html

​This Man Is About To Die. Why Is He Smiling?
http://ocistec-purgatory.weebly.com/blessed-martin-martinez-pascual.html

Jennifer Lawrence Says She Feels Guilty About Kissing a Married Man  -- and it's left her feeling some major guilt!
http://ocistec-purgatory.weebly.com/jennifer-lawrence--kissing.html

​The love of God
http://ocistec-purgatory.weebly.com/8203the-love-of-god.html

Does This Railroad Lead To Heaven ?
http://ocistec-purgatory.weebly.com/does-this-railroad-lead-to-heaven.html

A SOUL FOR SALE - A true story - Carol Kornacki
http://ocistec-purgatory.weebly.com/a-soul-for-sale---carol-kornack.html

Mother, why are you so beautiful ? I am beautiful because I love
http://jezismaria.weebly.com/i-am-beautiful-because-i-love.html

Vicka speaks about her trip with the Gospa (Madonna, the Virgin Mary) in the afterlife. Vision of Heaven, Purgatory and Hell. Read more: http://ocistec-purgatory.weebly.com/medjugorje---vision-of-heaven-purgatory-and-hell.html